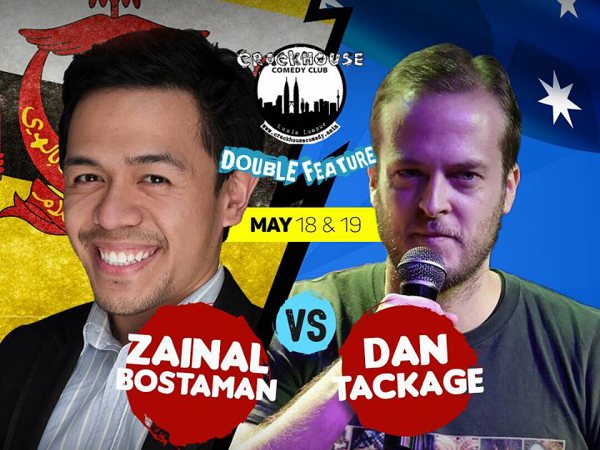 Crackhouse Comedy Presents: Koala Lumpur! Dan Tackage & Zainal Bostaman this 18-19, May 2018. An Aussie and Bruneian walk into a comedy club....you guys get your tickets online and come to the show to find out what happens.

4 years ago Dan Tackage moved to KL, having never performed comedy before. Since then he has performed in Singapore, Japan, Philippines, Thailand, Taiwan, Vietnam and Australia. He has also performed at multiple Crackhouse Comedy Festivals and LOLFest in Malaysia. Despite having a fear of flying, only being able to speak English (barely) and being incredibly introverted, Dan's work forces him to mingle with all kinds of people from South East Asia. This frequent travel leads to a steady number of misadventures which Dan shares with his audiences, although he sees it more as therapy.

Dan also founded the United Nations of Comedy Malaysia which has had 11 sell out shows across Malaysia and Singapore. After living in Malaysia for the last 4 years, Dan is now leaving his adopted home for a new life in a new country. These will be Dan's final performances in Malaysia.

Zainal is the number one comedian in Brunei, (okay, so there’s only like.. 4 of them) and is the founder of BruHaHa Comedy, the first standup comedy group in the Sultanate. They put on regular shows, open mics and workshops in hope to build up the grassroots comedy scene where Zainal serves as show producer, coach as well as a mainstay regular on the stage. Since starting comedy in Singapore in 2013, Zainal had been performing all over the globe, including stages in Singapore, Malaysia, Indonesia, London, Los Angeles, New York City and of course, his home country, Brunei Darussalam. He chronicles his sprint to reach the milestone of 100 shows in 5 months when he was in London in his badly titled upcoming book, "ZainalDoes London 100 times". You can read all about that as soon as he finishes writing the damn book, which, he said since Feb 2016, is ‘any day now!"

Not your ordinary place to have a sip of coffee or hang out. Unwind at the Three Years Old Cafe newl...

CMCO continues, the arts and some live music and comedy return, the DJs still continue from their de...