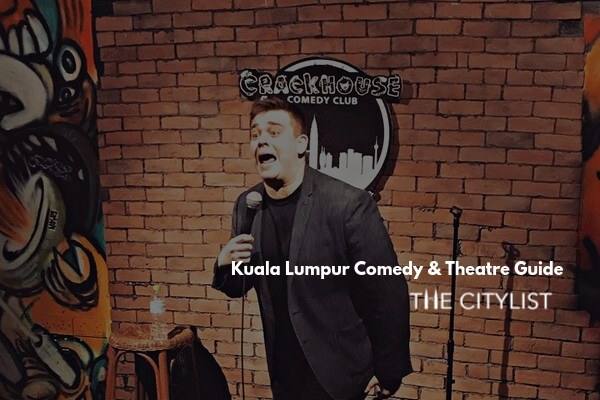 Is the smoking ban taking a toll on your social life? Did you choke on your Teh Ais when you saw the Raj Banana Leaf video? Do you wish you could tell all the racist people in the country to get lost? Or do you do a mean impression of Siti Kasim? Open Crack! open-mic night could be for you. Participants are given 3 minutes of stage-time and absolutely anyone can participate!

Constellations by Nick Payne at DPAC

Constellations by Nick Payne was described by the New York Times as the most sophisticated date play Broadway has seen. This 12 September 2019, the play is making its Malaysian debut. Constellations explores how even the smallest change in our lives can dramatically alter the course we take. It is a spellbinding exploration of love, science, quantum multiverse theory, and infinite possibility for heartbreak or for hope. Hosted by Rabbit Hole Productions, featuring Amelia Chen and Dominic Lucien Luk. Directed by Qahar Aqilah.

Crack the Gong: A Brutal Night of Comedy

Its KL's most brutal Comedy 'GONG' Show where the audience decides who goes home with prize money and who doesn't. Watch as each performer survives for 5 minutes to be decided winner or walk off to the GONG! so its GONG! or "ONG!" (Money). To get a spot to perform, arrive by 8.30pm to sign up.

You’ve seen Making Shit Up where every improvised comedy scene is inspired by audience suggestions, but what if an entire show is built around just ONE random word from the audience? That’s what the Pinball Monkeys will be doing. Taking a single word suggestion from the audience with nothing else but their brains, these improvisers will create an entire show with characters, dialogue, and situations that are 100% improvised. Featuring Rashid Salleh, Farid Azmeir, Steven Bones, and Muzakir Xynll, this brand new show is going to be a wild weird night you won’t soon forget.

Originally from the UK, Ollie Horn makes his nation proud by colonising ... the Asian comedy scene. Effortlessly combining witty observations with quirky storytelling, his razor-sharp crowd work is topped off with good ol' British intellectual arrogance. Founder of Japan's first bilingual comedy troupe, Ollie Horn has worked for the likes of Stuart Goldsmith, Brendon Burns, and Steve Hofstetter. Finalist in Shanghai and Seoul comedy competitions, Ollie was also a showcase act at the Melbourne International Comedy Festival and has been a mainstay of the Edinburgh Fringe Festival for five years and is fresh of his run with his new show 'Pig In Japan'.

Korean-American Danny Cho headlines for the first time at The Joke Factory. Growing up as the only Asian American at his school in East Los Angeles, he started performing stand up while enrolled in the University of California. He is unapologetic on stage with his stories and rants about the unusual events from his life. Through the power of YouTube, Cho soon became a star among the Asian American community, and soon thereafter, landed the role of Pongo, the fat, mute, Thai movie critic on MADtv. Next up was a call from Hollywood, landing Cho a role on the Super Bowl’s Bud Light commercial. In the last few years, Danny has been in various commercials and movies. In addition, Danny has been traveling around the US for his stand up comedy tour. Recently, Danny wrote a screenplay titled Ktown Cowboys, that won best feature at the Los Angeles Asian Pacific Film Festival in 2010. Don’t miss out!

Tour de Force of Ballet Manila’s  maiden tour of Malaysia. A 20-strong force of Ballet Manila dancers will share the stage with 20 local ballerinas this weekend at KLPac, combining the various eras of ballet and fusing it into a momentous staging and setting,

In the spirit of the critically acclaimed late-night talk show hosted by Harith Iskander himself comes his brand new podcast: Officially Harith! Be part of the live audience and ask him questions and give comments as the Godfather of Malaysian Standup Comedy discusses the week’s top stories, trends, cultural touchstones, or anything else he feels like talking about on this new weekly live show! Come and be part of the show!

If you’ve ever wanted to try stand up comedy in any language, this is the platform for you.
Come and watch regular open mic-ers and established comedians try out their stuff and sign your name up too so you can get a chance to see if you’ve got what it takes to be funny. Get your TIX at http://thejokefactory.wasap.my/ OR Call 013-5231491

From the desktop and homes of Kuala Lumpur DJs and Artistes, here's a selection of clubbing soun...

Nightlife and entertainment venues may be shut, but you can still get your dose of fun with Zouk Gen...

Way back in March 2020, before the Movement Control Order was announced in Malaysia, we were lucky e...

When you are stuck inside, crazy busy with work and craving some Netflix time, the last thing you wa...

From the desktop and homes of KL DJs and Artistes, here's a selection of clubbing sounds, live m...

It has been two months since Music Platform Live Fact KL's last show prior to the lockdown....

Oh to be watching the sunset while lounging on the rooftop of the Alila Bangsar, sipping a classic C...