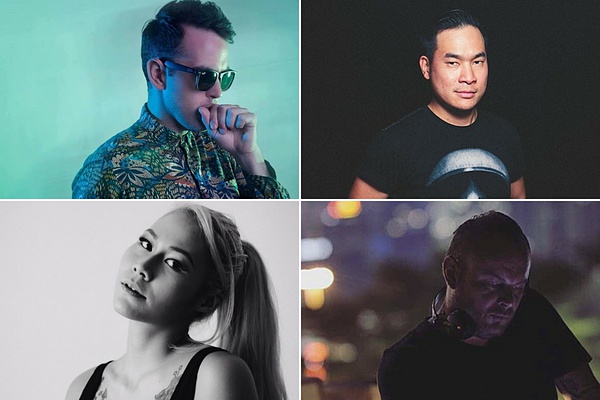 Westseven: In a current musical climate where originality can often be overtaken by the mundane and regular, Rory Gallagher’s tireless devotion and relentless energy have taken him to a point where he is beginning to shape the musical world around him.

With a recent signing to Anjunadeep, productions out on Bedrock, Click, City Fox and What I Play and his music being championed by the likes of John Digweed, Hernan Catenneo, Kolsch, Guy Gerber and Joris Voorn to name a few, 2018 continues to gain momentum. 2017 saw the birth of his own imprint, Soul de Anima, gaining plaudits the world over from the HQ in the heart of Kuala Lumpur.

A regular of Elysium in Kuala Lumpur and Jungle Experience and the KU Club on Koh Phangan where Rory played for almost five years, alongside heavyweight names such as; Orbital, Gui Boratto, Dubspeeka, Hot Since82, Yousef and many more. Over the last five years, Rory has also taken his sound around Asia including various clubs in Bangkok, Singapore, Kuala Lumpur. Tokyo and Sri Lanka for I ♥ UNA festival.

Victor G: Techno whiz, house head and influential tastemaker are well-deserved titles Victor G has rightfully earned in his electronic dance music career. With a thriving run spanning closing in on two decades, KL’s favourite deck maestro has definitely paid his dues.  Victor G marches on to keep the scene alive despite the lack of commercial appeal for the house and techno scene. While entertaining is an obvious goal, educating the audience is an element that he cannot dismiss. Victor G continues to school his audience at various spots around town spewing out tantalising techno at underground events, dishing out hot house tunes at the trendiest night spots and experimenting with his version of chilled out vibes that blend soul and funk while keeping his signature groove intact.

Meliha: A singer, composer, and DJ,  Meliha is heading up to be  of the most influential local female house music DJs with her selection of sexy dancefloor teasers. A curious one for music, her fingers seem to be the pulse of just about everything. Heavily influenced by the sounds of deep tech house and techno, this songbird delivers her sets with an intricately detailed flow. Her picks are playful, surprising and melodious. Meliha is not only redefining her sound limits, however as a complete musician- singer, DJ and performer, she has been busy in the studio with her “Lone Ranger” EP just out on Soul De Anima, one of Asia’s leading record labels. She has also just released her second record on Anjunadeep, one of the world’s largest dance music labels.

Circuitbreaker started his passion for music in the late 80s with a love of early electro, then moving through genres such as acid house, techno, breakbeat and deep house.

With a music collection that literally spans decades, his sets truly demonstrate the often clichéd ‘journey’, playing the latest rockin’ tunes, hypnotising bass lines, undiscovered gems and some pure grin inducing hands in the air classics. Having played many clubs in the early nineties, under many different guises, he took a step back from the live scene, all the while continuing to provide a new mix every few months for those in the know. In the last couple of years, Circuitbreaker has stepped out of the shadow once more and taken to the decks, based here in KL for the most part.

KYO KL: Mandarin Oriental Kuala Lumpur, off Jalan Pinang, KLCC, KL: Admission (with one drink): RM40 before 1am / RM60 after 1am. For table reservations please contact reservations@clubkyokl.com or 012-921 1730.

Moving from June to July with a selection of what's going on in arts, theatre, comedy, live...

Created by Elektronity, connect with like minded electronic music enthusiasts, industry creatives an...

Shangri-La Kuala Lumpur celebrates the celestial Mid-Autumn festival for 2022 with the third year of...

Jama KL and Zazz Productions present A Night of Blues & Rock featuring some of Malaysia's fi...

Comedian Jimmy O. Yang has announced additional dates for his tour with tickets for the 7th December...

With over 500 entries across the globe, Hennessy has narrowed down their search for the world’...

Located on the 51st floor, the warm hospitality of the staff greeted us instantly at the exquisite B...

Catch the legendary Engelbert Humperdinck Live in Malaysia at the Arena of Stars, Resorts World Gent...

Long standing charity retro festival RetroSunsplash (RS) will be pulling down its final curtain this...

Los Angeles superband, LANY is coming back to Kuala Lumpur for the second time with their ‘a...

Located on the 40th floor, in the heart of Kuala Lumpur with a breathtaking scenic skyscraper view o...