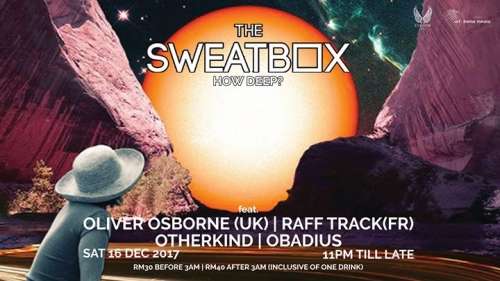 Dear party peeps, do you know what Oliver Osborne, Raff Track, Obadius & Otherkind have in common?
Well, we'll tell you : The Sweatbox this Saturday, December 16th and some amazing upcoming projects on Sweatbox Records- coming up in 2018! Berlin Minimal, UK dance music, French Techno, progressive , well, we have it all this Saturday. A medley of styles and energies from the four artists who have only one purpose this week- To deliver the best music for your Saturday night!

Otherkind's edition " How Deep?" returns this Saturday, December 16th with not one but two guests : Raff Track (France) and Oliver Osborne(UK) plus Obadius, our other resident.
This particular edition will be a deep-digging exercise into different shades of house and techno. Oliver's upbeat house tunes, Raff's eclectic, deep and melodic take on techno, Otherkind's experimental sessions and Obadius' smooth vibes will add up to the holiday cheer that has already started ahead of New Year.
The journey through different schools of house and techno blended in one party is meant to expand your horizons and make room for more talent behind the decks. Raff is popping his Sweatbox cherry whereas Oliver is returning after an inspiring 2017, both with new productions and with deeply-dug party tunes.
Oliver's infamous "Eyes To The Front"pool parties that he is hosting in Singapore,his label with the same name, Raff's music baby- Shifter at Jenja- Bali not only does it give the two artists perspective and skill for leading their dance floors in style, but also , their experience as promoters(both) and /or label-head honcho (Oliver) allows them to accept the beautiful challenge of turning a dance floor into a sweet submission through carefully selected tunes and vibrant energies.
A high-energy gig, this Sweatbox will keep you on your toes and unveil some massive music gems for your Saturday night
Join us and don't forget your shades! ;-)

****Art Xtreme Media & Elysium KL advise you to arrive early. Since the venue often reaches full capacity, in order to grant access to the event and avoid long queuing ,we suggest you make a reservation at the number listed above. We appreciate your understanding and cooperation! See you on the dance floor! <3

Always interested in Electronic Music, and fascinated by endless possibilities of harmonies.
Raised by the underground Berlin minimal and the French Techno scene, Raff is deeply touched by the beauty of melodies within the power of techno.
Sounds that impacts your thoughts and your gesture around Music.

"Born in Marseille in 1986, I started DJ'ing around the age of 15 when I bought my first turntables. I used to love nothing more than spending hour upon hour in vinyl shops, listening to, and discussing some of the best music of the time, with many of the greatest DJ's in Marseille."

"The power of a great bass stimulated my interests directly towards Techno, where I was influenced and inspired by Legends such as Laurent Garnier, and Jack The Marseille during this time.
As a kid, I would play guitar and would listen to and experiment with a wide spectrum of musical genres, including Blues and Classical, which I always found laid the foundation of Techno music, strange deepness, endless music lines and loops building up!"
"Growing up I had the amazing privilege to share my electronic musical interest with my uncle Maurice Bejart who was the greatest ballet choreographer off all time. He filled me up with humility and gave me the passion for the art of movement around music.
Slowly then seeing dozen of ballets during my childhood I started to dream that one day I would be playing music for the pleasure of dancers. This was my first real idea of Dj'ing."

"After a few years of DJ'ing I felt the need to experiment with my own sounds and started to make my own music with the legendary Electribes drum machine and quickly learned more about computer programmes such as Logic to begin with."
"It was during these experimental days that I was profoundly touched by the sound of Berlin. Like so many musicians of my generation, we would take trips there and have some of the best times of our lives musically!
Similarly, during this time, Marseille and Montpellier were both massive Minimal music scenes.The B Pitch Control Crew would be regulars in our area!"
The most massive influences for me during this point in time were Ellen Allien, Paul Kalkebrenner, Sven Vath and so many more of this particular genre.
These deep lines deeply impacted my production preferences and still do today, these influences carved me into who I am today and where my passions lay strongest!"

"I took a break of nearly five years, travelling around the world, experiencing many beautiful cultures, and obviously being aware of how fortunate I was to be able to absorb and be influenced by so much musical diversity, I finally put my bags down and settled in beautiful Bali. As a surfer back home in France, and now in Bali, the ocean has always played a huge role in how I developed as a conscious human being, how I connected not only with our earth, but with people, and I believe it's where I was able to 'read' people, to make a connection, which is one of the most crucial aspects of being a great DJ and music producer. This type of connection is invaluable when you want to provide your audience with music they are going to appreciate! So now I am settled in a place I'm continually inspired by.....the head phones are back on for good!!

I'm now playing as a resident at the two most notorious clubs of the country, the real underground club KOH and the famous JENJA . I've switch to Ableton live for production, surrounded by such talented musicians, working hard on lots of tracks with the intention of having my first release this year!!"

2016 was a big year for Oliver, having played Ultra Singapore, launched his record label ETTF Music, and played extensively across Asia. This year started just as strong, with &ME and Stefano Ritteri playing his tracks, closing out the massive Kolour In The Park festival in Thailand, playing one of the last ever sets at Bali's Koh, and being booked for a second time at Ultra Singapore.

Oliver Osborne moved to Singapore from London where he played at such notable clubs as Fabric, Corsica Studios, The Scala, 93feet East, and many more.

During his time in London Oliver played along side the likes of M.A.N.D.Y., Maya Jane Coles, Stefan Bodzin, Noze, and Matt Tolfrey to mention a few.

Since being in Singapore, Oliver has played everywhere worth playing, and in May of 2013 was part of the team that started the After Dark pop-up parties, at the hidden gem that was the original Kilo Lounge. He also brings his musical agenda to various pop-up parties around the city, and runs the phenomenally successful Eyes To The Front pool parties.

Though Oliver learnt to DJ on a diet of jungle, drum and bass and hip-hop, his ear eventually turned to house and techno, and his current sound has taken him around some of Asia’s top underground clubs, such as Glow in Bangkok, Lola, Shanghai, Jenja in Bali, Oma in Hong Kong, and as far afield as Mongolia.

Marini’s on 57 is launching a brand new ladies’ night for the fine and all around fabulo...

The concept of lying, to others, and even to oneself is cleverly explored in this Japanese/Malaysian...

Rockaway Showcase will be bringing Mongolian throat rockers The HU head in for a visit to KL th...

Zouk Genting is introducing their first signature night - LOST IN SPACE and they're starting it...

The Triple Threat kicks off 2020 with the popular The Bee Presents series this coming 28 February 20...

Thomas Gold makes his debut at Dragonfly KL for Anthems

ViViD is set to welcome back Pan-Pot (Tassilo) & David Gtronic at Kyo KL this 27...

Pisco Bar KL is all about the people who made it possible. And to celebrate 7 years of stellar event...

Discover the latest in Kuala Lumpur with your weekly Comedy, Theatre & Classics Guide for t...

Check out The City List Live music guide for 19 February 2020 with gigs around K...

Check out the latest events for the clubbing and bar scene in Kuala Lumpur from 19 February. Here ar...

Quiz Night is BACK at The Bee for Season 2

Who doesnt love a Quiz Night? Well, you will be pleased to know that the quiz happening every fortni...