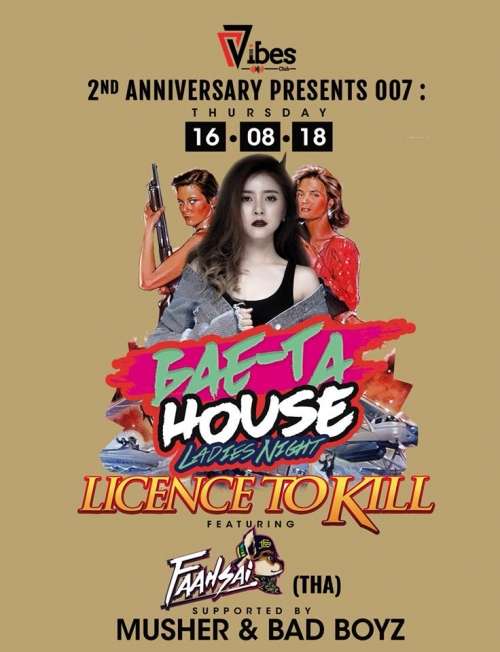 #VibesClubKL is celebrating the second year milestone anniversary! On this special occasion, we are hosting a 007 themed party happening from 15th till 18th August 2018 to show appreciation to our valued customers as every night has its own characters and good vibes moments made by you! With Guest DJ’s specially chosen to suit the music and theme of every night, be ready to experience our exclusive 2nd Anniversary celebration!

Vibes Club 2nd Anniversary presents “Octopussy” by #24K Squad featuring TALISA (INA), the RedBull 3Style Indonesia Champion 2017 is ready to take on the first night of a massive celebration this year! Exclusive treats for the ladies - Come in dress and walk in for FREE and tag along another 4 girlfriends and you'll get one complimentary bottle!

Vibes Club 2nd Anniversary presents “License To Kill” by #BAETAHOUSE featuring FAAHSAI (THA), one of the hottest female acts performing only the sexiest dance music for the ladies night alongside MUSHER & BAD BOYZ!

Cases fall in Malaysia and MCO continues for Kuala Lumpur which means it's back to the desk...

One of the fastest-growing live-streaming social communities, Bigo Live, will welcome Malaysian sing...

If you want to welcome the Year of the Ox in hipster style, then you should definitely order the Pop...

Aloft Kuala Lumpur Sentral is getting in the mood for love this February, so stay and wine...